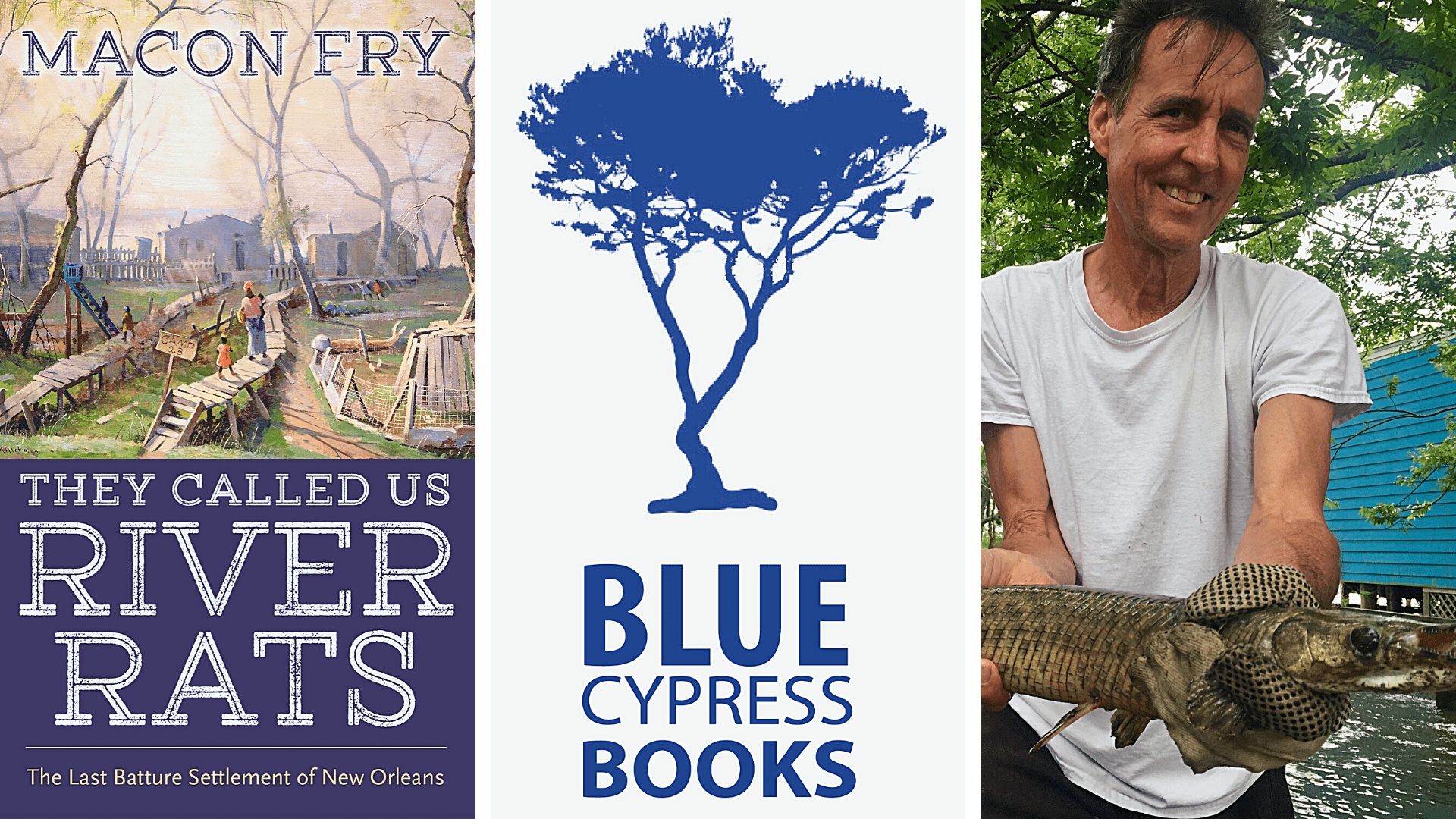 Join us Sunday, May 23rd from 1 pm – 2:30 pm in front our shop for a socially-distant sidewalk signing! Macon Fry will be signing his book, They Called Us River Rats: The Last Batture Settlement of New Orleans.

Masks are strongly encouraged for the event and required for in-store browsing.

They Called Us River Rats: The Last Batture Settlement of New Orleans is the previously untold story of perhaps the oldest outsider settlement in America, an invisible community on the annually flooded shores of the Mississippi River. This community exists in the place between the normal high and low water line of the Mississippi River, a zone known in Louisiana as the batture. For the better part of two centuries, batture dwellers such as Macon Fry have raised shantyboats on stilts, built water-adapted homes, foraged, fished, and survived using the skills a river teaches.

Until now the stories of this way of life have existed only in the memories of those who have lived here. Beginning in 2000, Fry set about recording the stories of all the old batture dwellers he could find: maritime workers, willow furniture makers, fishermen, artists, and river shrimpers. Along the way, Fry uncovered fascinating tales of fortune tellers, faith healers, and wild bird trappers who defiantly lived on the river.

They Called Us River Rats also explores the troubled relationship between people inside the levees, the often-reviled batture folks, and the river itself. It traces the struggle between batture folks and city authorities, the commercial interests that claimed the river, and Louisiana’s most powerful politicians. These conflicts have ended in legal battles, displacement, incarceration, and even lynching.

Today Fry is among the senior generation of “River Rats” living in a vestigial colony of twelve “camps” on New Orleans’s river batture, a fragment of a settlement that once stretched nearly six miles and numbered hundreds of homes. It is the last riparian settlement on the Lower Mississippi and a contrarian, independent life outside urban zoning, planning, and flood protection. This book is for everyone who ever felt the pull of the Mississippi River or saw its towering levees and wondered who could live on the other side.

Macon Fry is an author, writer, and educator. He arrived in New Orleans in 1981 to record and write about the unique culture and folkways of south Louisiana. For the past thirty years he has lived on the watery fringe of New Orleans, occupying a self-built stilt house over the Mississippi River, hidden by the huge levees that keep the city dry.