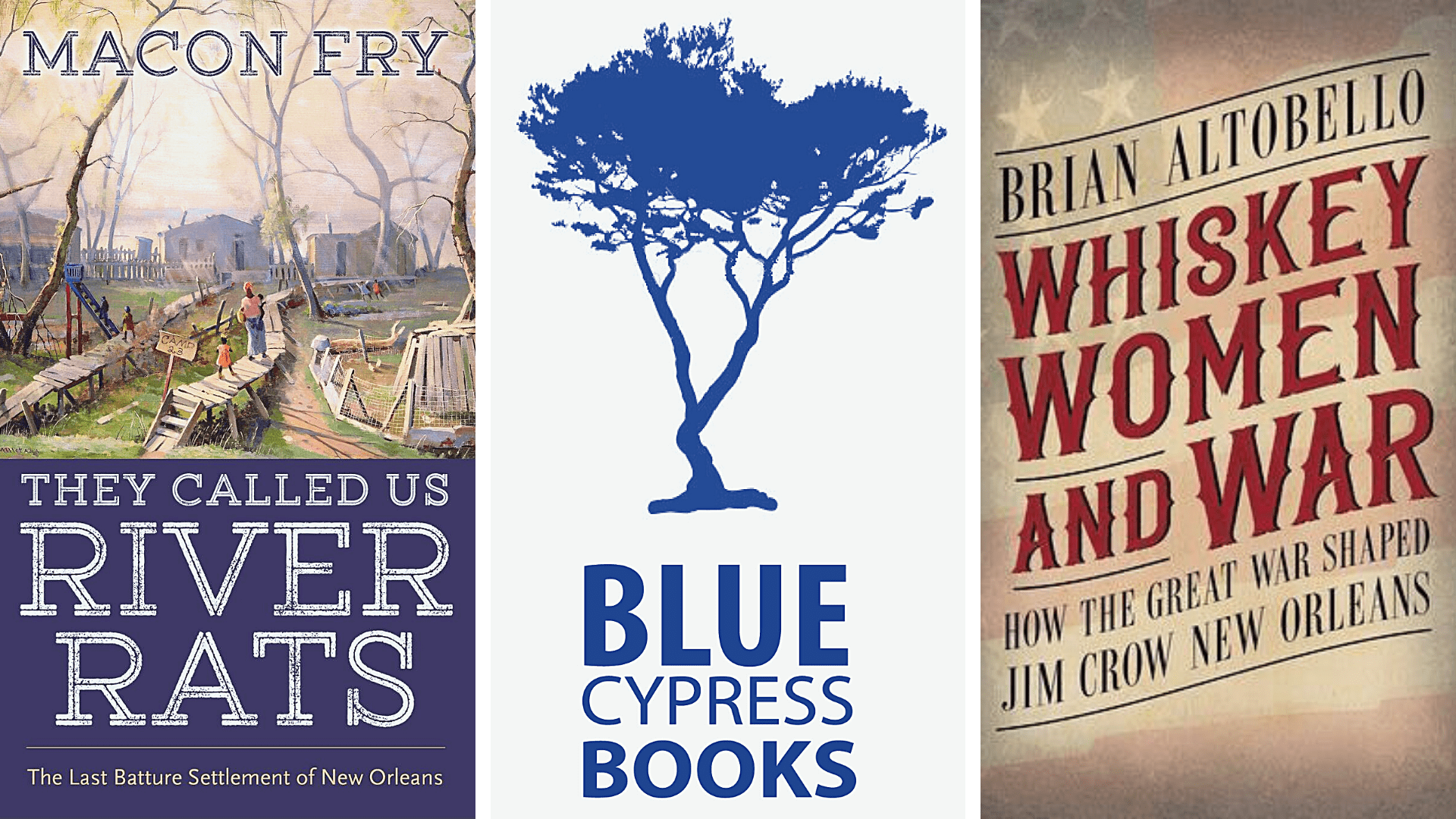 Join us Saturday, December 18th from 2-3:30 pm when Brian Altobello, author of Whiskey, Women, and War: How the Great War Shaped Jim Crow New Orleans, and Macon Fry, author of They Called Us River Rats, : The Last Batture Settlement of New Orleans, will be signing their books!

Entering World War I in 1917, a burst of patriotism in New Orleans collided with civil liberties. The city, due to its French heritage, shared a strong cultural tie to the Allies, and French speakers from Louisiana provided vital technical assistance to the US military during the war effort. Meanwhile, citizens of German heritage were harassed by unscrupulous, ill-trained volunteers of the American Protective League, ordained by the Justice Department to shield America from enemies within. As a major port, the wartime mobilization dramatically reshaped the cultural landscape of the city in ways that altered the national culture, especially as jazz musicians spread outward from the vice districts.

Whiskey, Women, and War: How the Great War Shaped Jim Crow New Orleans surveys the various ways the city confronted the demands of World War I under the supervision of a dynamic political machine boss. Author Brian Altobello analyzes the mobilization of the local population in terms of enlistments and war bond sales and addresses the anti-vice crusade meant to safeguard the American war effort, giving attention to Prohibition and the closure of the red-light district known as Storyville. He studies the political fistfight over women’s suffrage, as New Orleans’s Gordon sisters demanded the vote predicated on the preservation of white supremacy. Finally, he examines race relations in the city, as African Americans were integrated into the city’s war effort and cultural landscape even as Jim Crow was firmly established. Ultimately, the volume brings to life this history of a city that endured World War I in its own singular style.

As a New Orleans native, career educator, and historian aboard the Mississippi’s American Queen paddlewheeler, Brian’s interest in the city’s past has always been deep. His first book, Into the Shadows Furious, narrates the 1943 allied assault on the Pacific island of New Georgia. Whiskey, Women, and War: How the Great War Shaped Jim Crow New Orleans shifts the focus from the military toward the unique happenings which impacted the home front of New Orleans during the years 1917-1918, a fascinating story overlooked until now.

They Called Us River Rats:

They Called Us River Rats: The Last Batture Settlement of New Orleans is the previously untold story of perhaps the oldest outsider settlement in America, an invisible community on the annually flooded shores of the Mississippi River. This community exists in the place between the normal high and low water line of the Mississippi River, a zone known in Louisiana as the batture. For the better part of two centuries, batture dwellers such as Macon Fry have raised shantyboats on stilts, built water-adapted homes, foraged, fished, and survived using the skills a river teaches.

Until now the stories of this way of life have existed only in the memories of those who have lived here. Beginning in 2000, Fry set about recording the stories of all the old batture dwellers he could find: maritime workers, willow furniture makers, fishermen, artists, and river shrimpers. Along the way, Fry uncovered fascinating tales of fortune tellers, faith healers, and wild bird trappers who defiantly lived on the river.

They Called Us River Rats also explores the troubled relationship between people inside the levees, the often-reviled batture folks, and the river itself. It traces the struggle between batture folks and city authorities, the commercial interests that claimed the river, and Louisiana’s most powerful politicians. These conflicts have ended in legal battles, displacement, incarceration, and even lynching.

Today Fry is among the senior generation of “River Rats” living in a vestigial colony of twelve “camps” on New Orleans’s river batture, a fragment of a settlement that once stretched nearly six miles and numbered hundreds of homes. It is the last riparian settlement on the Lower Mississippi and a contrarian, independent life outside urban zoning, planning, and flood protection. This book is for everyone who ever felt the pull of the Mississippi River or saw its towering levees and wondered who could live on the other side.

Macon Fry is an author, writer, and educator. He arrived in New Orleans in 1981 to record and write about the unique culture and folkways of south Louisiana. For the past thirty years he has lived on the watery fringe of New Orleans, occupying a self-built stilt house over the Mississippi River, hidden by the huge levees that keep the city dry.