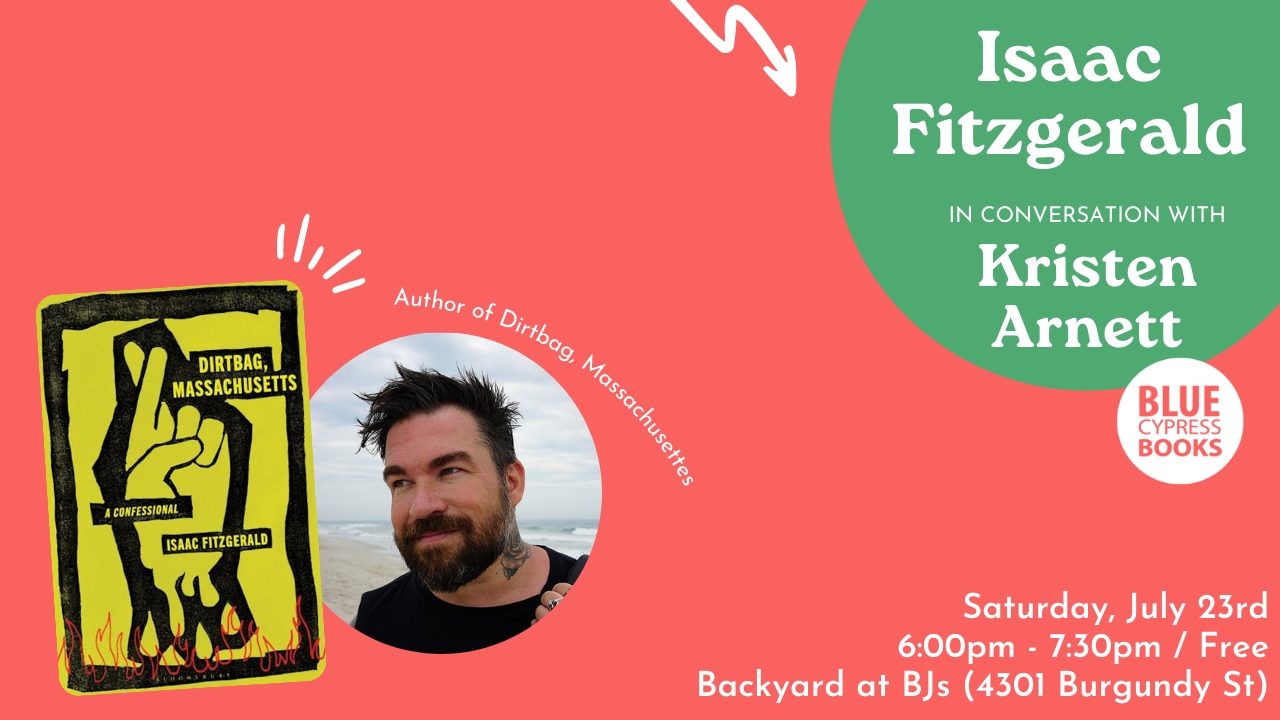 Join us Saturday, July 23rd at 6 pm at the Backyard at BJ’s (4301 Burgundy St) for an evening with Isaac Fitzgerald in celebration of his new book, Dirtbag, Massachusetts. He will be in conversation with fellow author, Kristen Arnett.

Isaac Fitzgerald has lived many lives. He’s been an altar boy, a bartender, a fat kid, a smuggler, a biker, a prince of New England. But before all that, he was a bomb that exploded his parents’ lives-or so he was told. In Dirtbag, Massachusetts, Fitzgerald, with warmth and humor, recounts his ongoing search for forgiveness, a more far-reaching vision of masculinity, and a more expansive definition of family and self.

Fitzgerald’s memoir-in-essays begins with a childhood that moves at breakneck speed from safety to violence, recounting an extraordinary pilgrimage through trauma to self-understanding and, ultimately, acceptance. From growing up in a Boston homeless shelter to bartending in San Francisco, from smuggling medical supplies into Burma to his lifelong struggle to make peace with his body, Fitzgerald strives to take control of his own story: one that aims to put aside anger, isolation, and entitlement to embrace the idea that one can be generous to oneself by being generous to others.

Gritty and clear-eyed, loud-hearted and beautiful, Dirtbag, Massachusetts is a rollicking book that might also be a lifeline.

Isaac Fitzgerald appears frequently on The Today Show and is the author of the bestselling children’s book How to Be a Pirate as well as the co-author of Pen & Ink: Tattoos and the Stories Behind Them and Knives & Ink: Chefs and the Stories Behind Their Tattoos (winner of an IACP Award). His writing has appeared in The New York Times, The Guardian, The Best American Nonrequired Reading, The Boston Globe and numerous other publications. His debut memoir, Dirtbag, Massachusetts, is forthcoming in July, 2022. He lives in Brooklyn.

Kristen Arnett is the author of With Teeth: A Novel (Riverhead Books, 2021) which was a finalist for the Lambda Literary Award in fiction and the New York Times bestselling debut novel Mostly Dead Things (Tin House, 2019) which was also a finalist for the Lambda Literary Award in fiction and was shortlisted for the VCU Cabell First Novelist Award. She is a queer fiction and essay writer. She was awarded a Shearing Fellowship at Black Mountain Institute and was longlisted for the Joyce Carol Oates Prize recognizing mid-career writers of fiction. Her work has appeared at The New York Times, TIME, The Cut, Oprah Magazine, Guernica, Buzzfeed, McSweeneys, PBS Newshour, The Guardian, Salon, and elsewhere. Her next book (an untitled collection of short stories) will be published by Riverhead Books (Penguin Random House). She has a Masters in Library and Information Science from Florida State University and currently lives in Miami, Florida. You can find her on Twitter here: @Kristen_Arnett